Will You Raise Good Bees? 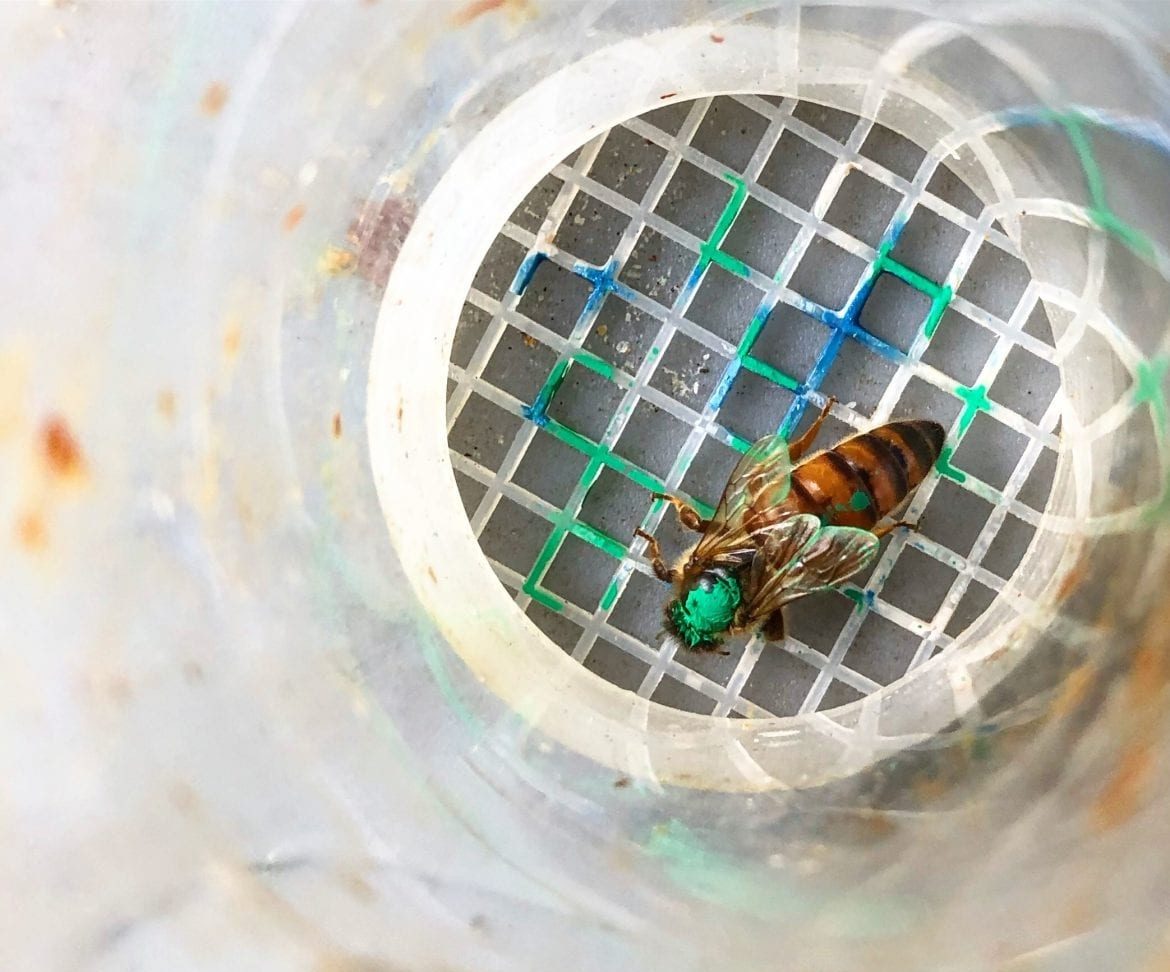 This year is the first year that I’ve used a ‘proper’ queen marking pen – yes, there is such a thing – and I haven’t been the most neat of artists whilst using it. Previous years have found me sporting an old bottle of nail varnish and, as you can see in the photo above, blue glitter was quite a favourite. However, to be a *really good* Bee Keeper, I had the queen marking phrase running around my head, reminding me that it’s good practise to mark queens a particular colour to correspond with the year that they emerge, almost as a coronation ceremony. As I only keep a few colonies, and all of them are here at Hen Corner, I didn’t see the need to buy a specialist pen. My record keeping easily confirms the age of the queen, to allow a bit of succession planning as the little lady reaches a certain age, and for me the main aim of marking a queen bee was to help identify her amongst her 60,000 offspring in the height of summer.

However, at the National Honey Show last October, after experiencing a colony kill their new queen simply because they didn’t like the smell of the new quick drying nail varnish, I decided to invest in the appropriate pen for this year to avoid further regicide.

A queen bee, if successfully mated, can be fertile for up to five years, laying up to 2,000 eggs a day in the summer. As we started this season back in March, I only had one queen bee and she was four years old, I was therefore on a mission to see her pass on her crown in a seamless transition and hope that maybe a couple of her daughters could go on to head up colonies of their own. By Easter Sunday, 21st April, we had three new monarchs and a fourth by 21st June.

So why Green Queens? Our little phrase is repeated every five years, ‘Will You Raise Good Bees?’ Suggesting that queens emerging in years ending 1 & 6 are marked white, yellow for years ending 2 & 7, red for last year, green for this and then I need to decide about that glitter nail varnish that I’ve still got in my bee tool kit…

In the height of swarm season, on the wettest day in June, bee keepers from all over the country gathered in Marlbough House Gardens just off The Mall to celebrate our precious pollinators and raise money for Bees for Development, a fantastic charity that provides information and support to beekeepers in remote areas of the world’s financially poorest countries. Among the great and good that were proud to show their support were Bill Turnbull, Martha Kearney, the Duchess of Cornwall and, our favourite, Mary Berry.

If you’ve ever witnessed a live bee swarm, it really is an amazing feat of nature. Happening, usually, because the original colony is doing so well that the bees decide to multiply to become two colonies by rearing a new queen and sending off her predecessor with up to half the colony in search of a new home. The new queen will take over the reign assisted initially by her older sisters and soon her own daughters. Between May and June, I collected swarms from 2 schools and a friend’s garden, in each case the bees had settled in large clusters high up a tree and I was able to catch them in a large upturned water dispenser bottle (with the bottom cut off) offered up underneath them with a long telescopic pole. All are still doing well, as far as I know…

This summer we have seen record numbers of guests on our bee keeping courses, we started in April and will run our last couple of days in September, in total we will have introduced our wonderful honey bees to over 90 adults & 50 children as well as school visits that worked with 14 different classes – that’s a lot of people learning to love the honey bee!

Hope you are enjoying the summer,

Will You Raise Good Bees? was last modified: October 31st, 2019 by Sara Ward

So proud of you!