Valentines Day and they’re back in lay 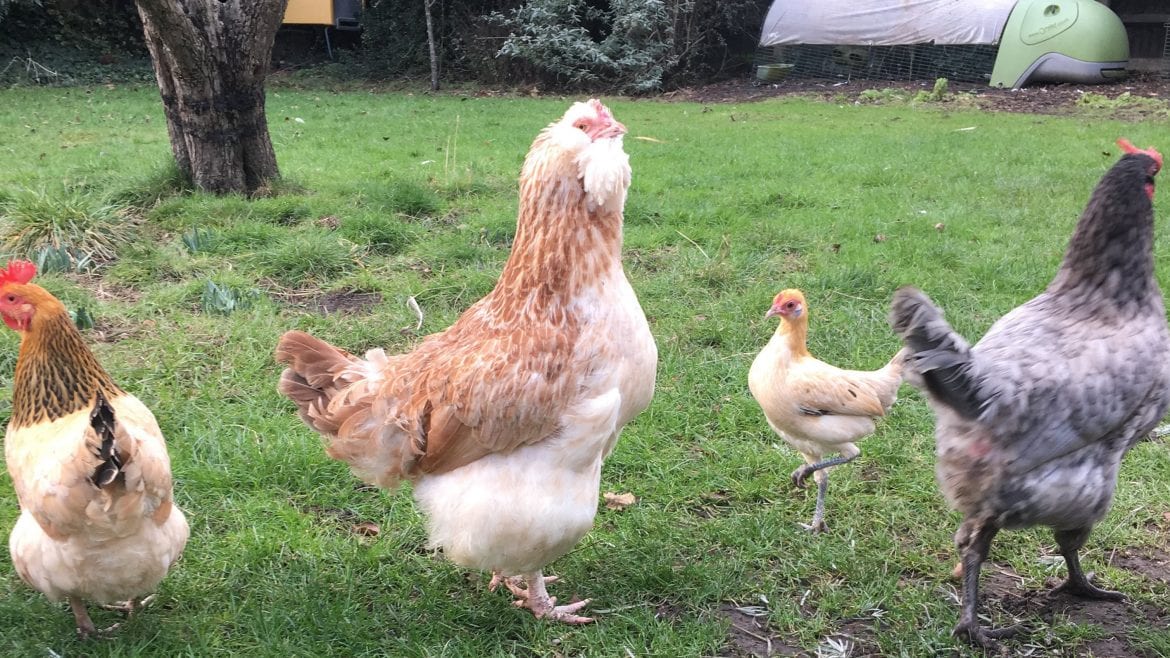 We’ve been keeping hens in London since 2007 and it was on moving to the house in the corner of the street, the following year, that opened up the possibilities of increasing the size of the flock, indulging in different types of chickens, and welcoming others to come and see how easy it is to keep chickens in a London back garden.

Initially we had two hybrid hens, specifically bred for maximum eggs and minimum broodiness, that we named Pepsi and Shirley, after the backing singers in Wham!

Just before the house move we adopted a couple of baby chicks from our children’s school that had hatched in a classroom incubator for a special Easter project. As the completion date of the house move was pushed further back (aren’t they always?), these little chicks lost their fluff, grew in size and strength, and became noticeably larger and smellier living in their pet carrier in the back room. By the time we moved house at the end of July, they were hardy enough to live outside, no longer needing the warmth of a heat lamp, but were not yet big enough for cohabitation with the bigger girls.

So we bought another chicken coop.

We’ve always used the groovy Eglus made by Omlet, they are well designed, easy to keep clean and are, in our experience, completely fox resistant. We still have that original Eglu Classic that Andy arranged as a surprise birthday present many years ago, as the smallest of our three coops, it houses our six smallest hens; three pairs of bantams.

That’s as far as the order and planning goes, for whilst the books says that chickens must be accommodated within flocks of birds of a similar size and weight, and my plan was to have the large pure breeds in one coop and the hybrids in another, we’ve discovered that the girls have both minds, and personalities, of their own.

For example, we have a couple of cutie Pekin bantams, named Nandos (don’t ask) and Tweedle Dum, sadly Tweedle Dee is now pecking for corn in the sky, and whilst these are the fluffiest, cuddliest feathered friends you could find, so much so that children have tried to sneak them home with them, but they are right little bullies – Nandos in particular. So if these two were in the ‘Bantam Eglu’ the other inhabitants would be in a very sorry state.

At the other end of the flock, we have a large pure breed Salmon Faverolles called Snowy (because she has a beard and moustache like Santa??) who was so badly injured in the establishment of the pecking order when she was new, that her nervous disposition and sheer panic in the presence of her perpetrators means that she needs to live with smaller birds. Nandos still tries it on with Snowy even from a third of her size.

So as we have bantams to the left, pure breeds to the right and a good old party of all shapes and sizes in the middle, we’ve had to move some hardy hybrids in with the big girls just to even out the perch space. My goodness.

Fortunately, as dusk falls, if they’ve been out free ranging, they generally know where to head for home, however, a quick check with my handy head torch allows me to relocate the odd Bantam that might try it’s luck with the bigger girls, not understanding that Mother knows best.

As spring approaches and the days get noticeably longer, the hens are eating more and able to lay eggs more regularly. Several of our hybrids have laid throughout the winter supplying both our bakery and it’s customers, but now is the time for the pure breeds to start earning their keep and present us a daily offering each.

As far as I know, there’s only ever been one day, since we’ve had the larger flock, when every single chicken laid an egg, and the last egg of the day was laid in Andy’s arms by Bunty in the middle of a family chicken course, and rolled down his leg to smash on the floor!

Traditionally, 14th February is the day we can start to expect the extra eggs, though I’m not sure if I can really handle 24 a day!

If you’d like to know more about keeping chickens, why not come on a course and hug a hen, in our experience, a chicken a day keeps the doctor away…

Valentines Day and they’re back in lay was last modified: February 14th, 2019 by Sara Ward

Come and visit Hen Corner and try the life for yourself, be it keeping chickens, making cider, growing your own food or artisan cooking skills we are enjoying life to the full and invite you to come and try your hand to it!