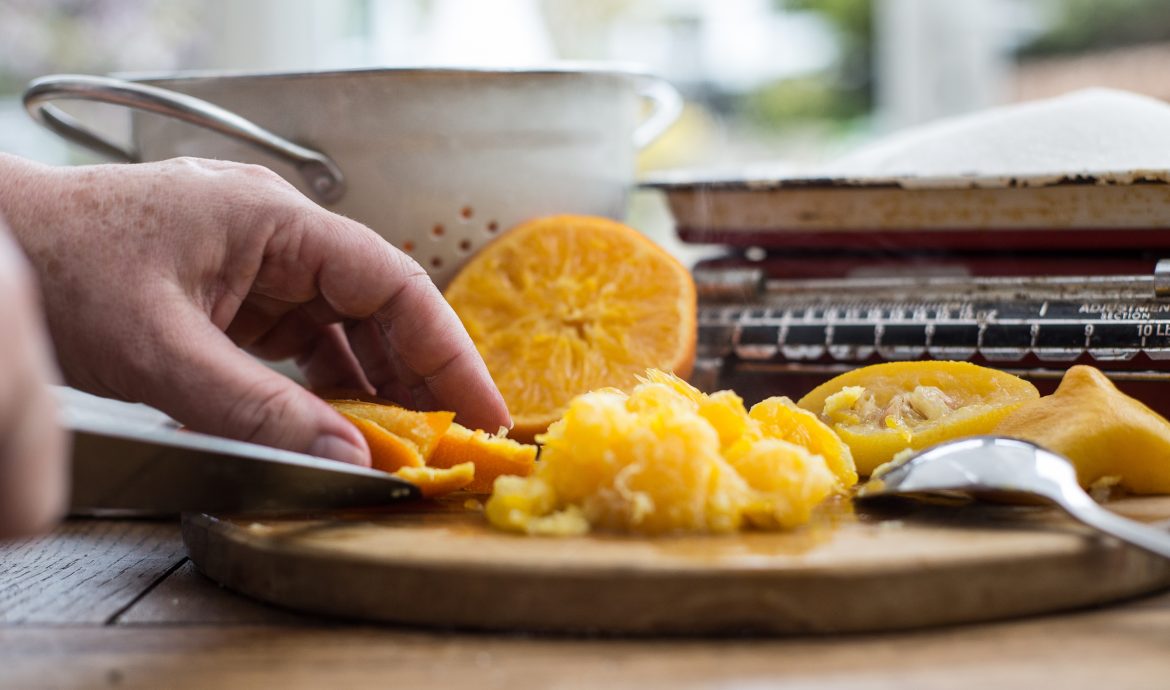 I’ve been making marmalade for many years now, every year that we’ve lived in the corner house (that’s been 12 years), and for a good few years before that. I remember the first time that I stocked up on Seville Oranges, I had great plans to boil up buckets of the stuff, unfortunately, I learnt some important lessons the hard way. Trying to overload my biggest saucepan with sugar and fruit was not going to save time, it resulted in a huge mess that was both counterproductive and very sticky. Many hours later, after redistributing it between every saucepan, wok and frying pan that I possessed to allow enough space for the syrup to boil up in a high foam to reach the perfect set, I achieved a thing of beauty.

I have fallen in love with my marmalade, I think it’s quite a grown up relationship, there’s something special about Sevilles.

Back in the middle ages, the variety of orange that Seville is now famous for was originally grown ornamentally. People believed that the orange (possibly the golden fruit that the Greek God Hercules sought for immortality) brought everlasting happiness to their owners. Being too bitter to eat, it was prized for the medicinal properties of the essential oils extracted from the fruit’s skin.

Probably inspired by a Roman delicacy of quinces preserved in honey, a little creativity with this otherwise inedible fruit revealed that the high pectin in the citrus fruit made for a perfectly set spread and the sugar nicely balanced the bitterness.

Our Toast and Marmalade course was one of the first courses that we developed here at Hen Corner when we first began 10 years ago. It was a natural choice to invite guests to join us in our regular seasonal activities and, whilst you can make marmalade with any citrus fruit, there really is something special about the bittersweet charm of the Seville orange variety. As these special fruits are only available in January, we need to get busy preparing as much preserve as possible to stock up for the year ahead. Of course, marmalade is traditionally served on toast, so what better way to utilise the time whilst waiting for the oranges to boil than to make a lovely loaf of organic bread each to take home with the still warm pots.

A few years ago I created a new recipe, especially for the National Honey Show, that I entered into the competition along with our honey, beeswax and biscuits. We were so pleased with our new Lemon Honey & Ginger Marmalade that we’ve since added it in to the recipes that we make on our January courses.

So why am I writing about marmalade when it’s ‘So last season’?

Well, one of our guests on this year’s courses announced that he had come along as he was trying to win a double gold at The World Marmalade Awards, he had been awarded a bronze in the homemade category previously and was looking to hone his craft – no pressure! I’d been following the awards over several years and had just never got round to entering, they have thousands of jars to taste and judge and I was never particularly confident that mine would stand out.

This year, however, probably prompted by my course guests, I decided to post off a couple of jars from the shelf. As I sell my marmalade through our weekly bakery, I was no longer allowed to enter the homemade category and had to join in with the Artisan Producers class.

And, wow, look what happened!

I am more that thrilled and will be doing my best to improve on it still in future years.

If you’d like to join us when we next make marmalade, we’ve got our dates published for next year’s courses, Wednesday 13th & Tuesday 19th January, and are already open for bookings….

Have a great week and enjoy the sunshine,

It's a wonderful thing to create beautiful home made treats for friends and family at Christmas. Join us for the day as we bake, roast, preserve and decorate to fill gift baskets for the festive season...