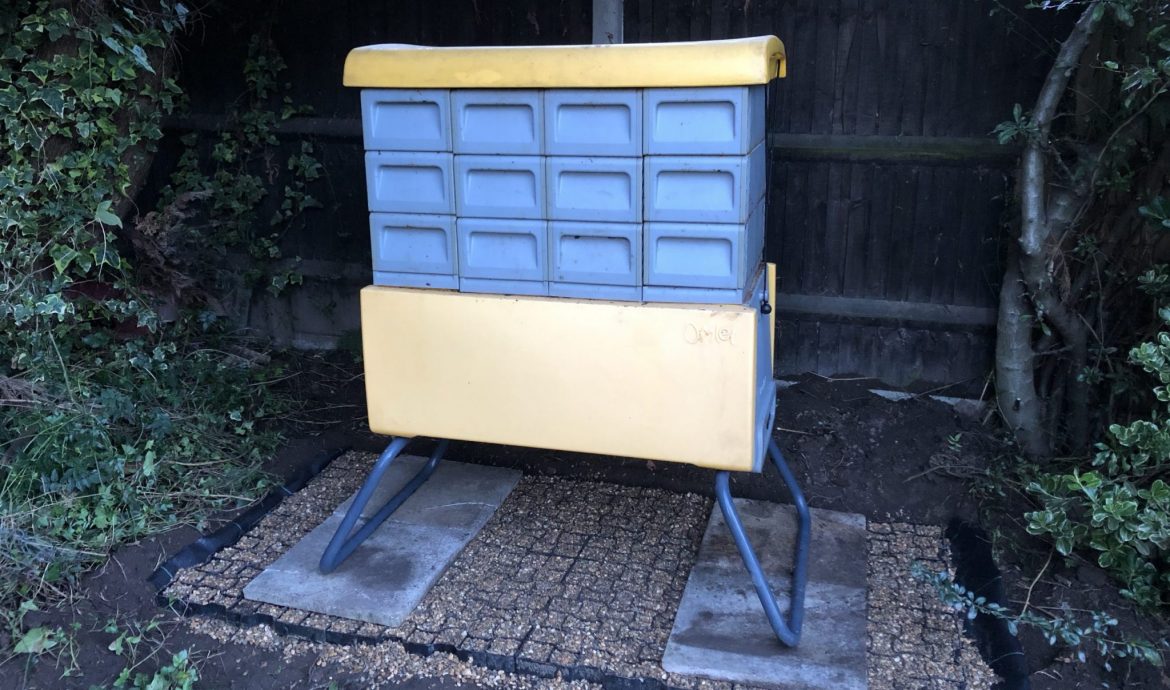 If you are anything like me, then there’s always a number of jobs to be done, at home, in the garden, with the family, and with the bees.

Last summer, when the hives were heavy and the honey boxes were full, my husband, Andy, commented on the shoddy foundation that our large Omlet Beehaus was standing on. When I’d initially set it up in 2012, like a large Lego toy with a small allen key, I thought I’d been very responsible by placing a couple of old paving slabs underneath. Unfortunately, the combination of a large hive holding two colonies side by side and curious scratching by squirrels, cats, foxes and chickens resulted in serious erosion of the soil under the slabs – no, of course I hadn’t laid them on a foundation of hardcore, sand and cement!. As the slabs proceeded to lose their foothold, I simply wedged spare bricks underneath on a regular basis to minimise the trip hazard accentuated by the trailing Jasmine vine that would often grab my ankle.

It really was an accident waiting to happen.

There were so many reasons not to fix the problem there and then; the hive would obviously have to be moved before we could attempt a new proper foundation and nobody moves a hive in high summer without good reason and careful planning. So the task was pushed forward to mid January, this would be the perfect time as the Beehaus would be light enough to lift with the colonies at their smallest and no honey in the supers, it should also be cold enough to discourage the bees from active flying.

As mid January came around, I saw the task glaring at me from my diary and hoped that the weekend in question would be too wet to consider such a job. I briefly mentioned it to Andy the evening before said appointment and his reply was along the lines of research/proper job/more than an afternoon’s work/etc. and we came to the conclusion that the forecast temperatures were going to be too cold for cement to set and we therefore had permission from on high to postpone.
But deep down, with a cold but bright sunny day ahead, I knew this was the best day (of the whole year) to get the job done.

Half an hour’s research on my phone over breakfast convinced us to forgo the sand and cement and to use plastic grid shed base that, once laid on flat ground, is filled with gravel for strength and drainage. Once we’d decided how to tackle the task, the biggest challenge was collecting the equipment from two different branches of the same DIY store as their online stock levels didn’t tally with that which was actually available!

With my teenage son to help, we got the whole job done – including a good scrub down of the outside of the Beehaus – in 90 minutes. We were jolly pleased and I’m now planning to build a similar base for my National Hive the other side of the garden. It’s not in the diary yet, but maybe I’ll get the job done at the same time as the March Shook Swarm?

I’m loving these cold bright crisp days that we’ve been having recently, it’s a great opportunity to get ahead with jobs in the garden,

Nice job! Must feel good to have it done.

We’re really pleased with it and can’t believe it only took an hour and a half to complete!

Where have u got your hives positioned in your garden? I’m seriously considering getting a hive, but have concerns ré neighbours and my kids play areas.

Hi Helena, we’ve got them in the far corner of the garden with a string of bunting as a ‘don’t go past here without a bee suit’ barrier. If your children are younger, then a more stable fence can be used. The hives are up against a fence so the bees need to fly high to get over it. Unless your neighbours have the best forage around, the bees will be well on their way once up high. If they do have the best forage, they’ll be attracting bees from miles around and yours won’t make much difference!
Why not come on a course and find out more?
Sara

Using trimmings from the garden and a selection of ribbons and decorations; this special course has been designed to bring together friends as we make a Christmas Wreath at the beginning of the festive season…

It's a wonderful thing to create beautiful home made treats for friends and family at Christmas. Join us for the day as we bake, roast, preserve and decorate to fill gift baskets for the festive season...

An afternoon for the whole family in the garden at Hen Corner… You will be welcomed with home made refreshments and introduced to the joys of keeping chickens!